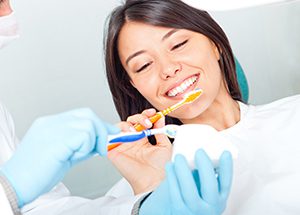 Gingivitis, often known for its tendency to cause gums to bleed, is caused from poor oral hygiene. The disease isn’t usually painful or uncomfortable, but it can eventually lead to periodontitis, which is more serious. Getting an immediate treatment at the first signs of gingivitis will prevent the disease from spreading further and give you the best chances for reversing any damage.

Gingivitis is possibly the most common form of gum disease experienced in the United States. It isn’t a very harmful disease on its own, but it can lead to bigger problems if not treated properly. It’s possible that due to it being such a mild issue, it often goes unnoticed until bigger problems start to result from it.

Poorly maintained oral hygiene is the leading cause of gingivitis. Plaque is a film that attaches to your teeth and wears away the minerals that protect the enamel. It is made primarily from bacteria and comes from sugars and starches reacting with the bacteria normally found in your mouth. If plaque is not cleaned within 2 or 3 days, it can harden around the gum line to form tartar. Tartar is what leads to gingivitis and can be difficult to remove without a professional cleaning. Tobacco users, elderly people, poor diet, drug use (including prescription medications) can contribute to the likelihood of developing gingivitis.

Possibly the most well-known sign of gingivitis is the sight of blood on your toothbrush after just brushing your teeth. Other symptoms can include:

At the first sign of any of these symptoms, it’s wise to schedule a dentist appointment immediately. Quick treatment increases the likelihood of reversing any damage and prevents the onset of periodontitis.

Dentists typically diagnose gingivitis based on symptoms and visual examination of the teeth and gums. In cases where there doesn’t seem to be an obvious reason for the gingivitis development, you may need to get a medical evaluation.

The first part of treatment is a thorough cleaning of your teeth to remove plaque and tartar. We will give you tips for proper brushing and cleaning at home so you can prevent yourself from getting gingivitis again in the future. If there are any dental implants that could be contributing to the gingivitis outbreak, we may adjust them for a better fit, reducing stress on the gums.

STAY UP TO DATE

Sign up for our newsletter to receive updates about NABA, promotions and special tips.

Fahim Iqbal
03:00 16 Nov 18
I had a great experience at Naba Dental. The Dentist and her entire staff was great. Great environment. If you are looking for a Dentist that you can trust on, this is the place. I have been to several other places in the past. Some of these Dental clinics out there, they really take advantage of you and you go for something and they give you a long list of issues. She was great. She only recommend things that i really need. She is my Dentist now. Strongly recommend her.

Enrique Caxaj
13:53 31 Oct 18
For someone who never visit a dentist before. Been little afraid.. my first time was great the staff made me feel comfortable and kept me informed of every detail.. just done with my second cleaning I have to give it to the great staff and their passion to work with patients..

Fayha Iqbal
01:56 24 Oct 18
My grandmother went in for an extraction. Dr.Mirza was very nice and helpful. She was very gentle and careful throughout the procedure. My grandmother was very happy and satisfied with the results. I would definitely recommend her to everybody for any dental needs.

Olivia Auzenne
17:49 10 Sep 18
Beautiful office and great customer service! The ladies that work here and very nice and informative. I love the TV on the ceiling to keep you entertained during your procedure!

Prachi Mehta
14:54 23 Aug 18
Great doctor and efficient, friendly staff! Dr. Mirza will not prescribe you unnecessary treatments. She works on preventing conditions and treating holistically. Talking to her is very therapeutic as well!

James Chew
19:49 13 Dec 18
I enjoyed my dentist visit, I will definitely be returning. The staff were very helpful and not pushy. I like how the dentist keep asking me how I was doing throughout the cleaning to make sure I was comfortable.

Tim Garrett
20:02 13 Dec 18
I had to get a filling for my daughter and Naba Dental was amazing. They made hr feel at ease and she told me she didn't feel scared anymore of dentists. Great experience.

sara masoud
14:32 16 Jan 19
Simply amazing, I usually have bad experiences with dentist but yesterday I was proved wrong, Dr.Mirza had a soothing voice and a light hand she was able to calm me down and she was taking her time with me. I went for pain in my two front teeth and she helped me with it. I would definitely recommend this place the whole staff is great!

Sharia Verde
21:27 16 Jan 19
Went for the first time Monday. The young lady in the gray scrubs at the front desk was really nice. Staff is awesome I would recommend my family and friends.

Oscar Cruz
19:38 18 Jan 19
Caring staff and wondering environment. They were wonderful with my kids. Being at the Dentist can be a scary thing for a child but they made them feel comfortable and I will be coming back for my wife and I visit soon.

Moosa Syed
05:55 13 Feb 19
Exceptional service provided from all staff. A compassionate and hardworking team that ensures that each patient receives the highest quality of care, treatment, and satisfaction with their visit. The dentists fixed my smile and helped restore my confidence!

N I
17:40 06 Mar 19
Naba Dental is one of the best dental clinics I have been to. The staff and environment is so friendly. Also, Dr. Mirza leaves no doubt in your mind. She is great and makes sure you are satisfied.

Ambareen Virani
22:38 06 Mar 19
Naba Dental had a great environment and the staff was kind and informative! 10/10 would recommend to anyone in search of good dental care!

lida taghizadeh
17:11 08 Mar 19
I love Dr.Mirza. I brought my daughter last year to her and I was very satisfied with her job. So, I changed my insurance this year just to have the opportunity to come and check my teeth too. I am sure you will like her and her team. They are very nice and kind. Very organized. And the place is very clean.

Khursheed Begum
20:38 08 Mar 19
I had a great time at Naba Dental. The place is so welcoming and warm. This place will make sure your time and money is not wasted! They are the best dental clinic and the only one I will ever go to!

U S
15:53 13 Mar 19
Very good clean office with wonderful staff! Dr Mirza is a very friendly and warm dentist, who explains everything she does and what’s needed to have/keep healthy teeth. They are wonderful with kids as well. Kids aren’t scared at all and feel comfortable going to the dentist :) we are going for years to Dr Naba and we can highly recommend this office!!!

Phuong Phung
16:54 20 Mar 19
My husband and I are new patients. All the staff was very patient and helpful. They walked us through everything step by step and made sure we were satisfied before we left. Thank you Naba Dental!

Noor Ahmed
06:26 26 Mar 19
We have been going to Naba Dental for about 2 years now as a family. They have a clean, comfortable and modern facility. The staff is helpful, flexible and courteous. Dr Mirza is excellent. She is skillful, efficient, patient, thorough, forthcoming and honest. She even suggests ways to save us money even though it might not be financially beneficial to her practice. This is a rare quality for a dentist. I highly recommend this practice.

Nahomi Pereira
18:05 29 Mar 19
Absolutely love this place is nice and peaceful. I was able to be seen at my appointment time. Loved my experience from the time I walked in the door receptionist was really nice and with a smile, dental assistants were amazing and polite, I LOVEEEE the dentist she explained in detail to me exactly what I needed to have done and what wasn’t necessary at the moment. The wonderful lady who brought me the estimate was amazing as well giving me a lot of options I could do. Highly recommend this place.

Khateeja Fatima
18:35 22 Apr 19
I love Dr. Mirza. Been coming here for 4 years now and we couldn't be happier! My 5 year old is very comfortable with her. The best dentist there could be!

Brett Anderon
19:30 24 Apr 19
The dentist is wonderful! She makes sure to address all your concerns. My younger child comes to her also and she is so comfortable with her.

S Hasan
20:25 18 Jul 19
Dr. Mirza and her staff are very friendly and warm! They make sure you feel comfortable and don't push for procedures.

Pratik Banjade
03:09 19 Jul 19
Great people! Very nice and friendly! In the front is also a great person too!

King C
02:30 27 Aug 19
Everyone I met in Naba Dental is friendly and professional. I picked them for my teeth checkup recently as I saw the good reviews from here. I asked a lot of questions for my problem and Dr. Mirza explained everything with patience. After using their services I can say all these good reviews are accurate and I highly recommend this dental office!

Hanene A
03:55 06 Sep 19
I have been visiting Naba Dental for fillings. The staff is very welcoming. Dr Mirza is friendly, professional and make the procedure easy and comfortable. For the excellent provided services , I ll continue my dental check-ups with Dr Mirza.

Charla Alexander
15:51 16 Sep 19
My daughter has been going here since she was 6 months and they do a great job!! They provide great service and everyone is so friendly and the doctor is very knowledgeable and nice! This is a great family dentist!

Phoebe Phung
07:14 09 Nov 19
My husband and I are new patients. All the staff were very patient and helpful. They walked us through everything step by step and made sure we were satisfied before we left. Thank you Naba Dental!

Don Nguyen
14:18 27 Nov 19
My coworkers recommended this place to me. The staff is very friendly and makes sure to send you lots of appointment reminders. The dentist is very nice as well. I like that they show you each tooth on the screen versus just telling you. You can also watch the Office or any show on Netflix while you get your teeth cleaned. Would recommend!

Gabriel J.
20:30 27 Nov 19
I had a great experience!The staff are nice and out going, Would recommend going here👍🏼

Shaukat syed
18:54 02 Dec 19
Best place to come for all your dental needs. They handle you with such love and care, you live feeling happy and altogether like a new person. Their care and technology is top of the line and their staff is very knowledgeable and helpful.

Faramarz Motallebzadeh
17:45 02 Dec 19
It’s great area with awesome service. Today I had cleaned my tooth and I Recommend this place for everyone looking for good dentist

S C
20:33 03 Dec 19
The people are nice and professional. The environment is very clean with top notch technology to give you an in depth look at your teeth. Great place.

Hiba Hassan
16:51 16 Dec 19
I’ve been going to Naba Dental ever since it opened and it is truly amazing. The staff is so kind and friendly and the doctor always brings a smile to my face. She is extremely caring and interacts with the patients. Always fun visiting Naba!

Muhammad Hassan
18:20 16 Dec 19
The people are nice and professional. I have been taking my 2 year old daughter. She loves visiting the place. Thumbs up to D. Mirza.

Matthew Hernaez
20:48 23 Dec 19
The staff at Naba are very accommodating and friendly. My whole family gets their teeth cleaned there and we all love it. The wait is never long and the staff are very nice, which makes for a nice visit every time.
Next Reviews